Deca Durabolin (Nandrolone) is a mild injectable steroid. It does not produce huge muscle gains, however, it’s commonly used in bodybuilding and makes our top 5 list because its pros largely outweigh its cons.

As far as steroids go, Deca Durabolin is one of the safest, with it still being FDA approved for the treatment of osteoporosis and anemia.

Thus, side effects on Deca Durabolin are minimal compared to other heavy bulking compounds.

The main side effect associated with Deca Durabolin is low endogenous testosterone levels and sexual function. However, such side effects can be reversed post-cycle in a matter of weeks or months. Depending on how effective a bodybuilder’s PCT is, will determine how quickly hormone levels regulate back to normal.

When Deca Durabolin is added to a stack with other bulking steroids, it is very effective at slowly adding good amounts of size and mass to a person’s physique. It won’t blow up a person’s muscles in the first week, as it has long esters, and thus takes several weeks to kick in. However, with an extended cycle and a moderate dose, Deca is very effective at adding moderate amounts of muscle and is very much an underrated bulking steroid.

Arnold Schwarzenegger and other bodybuilders back in the 70’s commonly stacked Deca Durabolin with compounds such as Dianabol, helping to create a huge, full look; that looked fairly natural and very aesthetic.

Deca Durabolin is predominantly used for bulking purposes; however, due to it only building moderate amounts of lean muscle (by bodybuilding standards), it is often cycled with other, more potent AAS.

Generally stacking steroids together leads to an increase in side effects, such as further elevations in cholesterol. However, in Deca Durabolin’s case, stacking may help to prevent some of its negative effects on sexual health.

Thus, Deca Durabolin-only cycles are seldom among bodybuilders, in a bid to keep androgen levels high, mitigating the risk of erectile dysfunction on-cycle.

However, if a bodybuilder were to utilize a Deca Durabolin-only cycle, these are the typical dosages they would use (below): 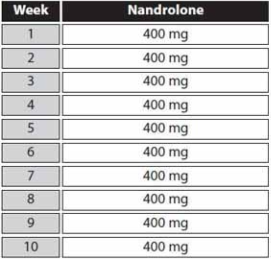 Dianabol (Methandrostenolone) is one of the most popular steroids available, due to its exceptional mass-building effects.

Dianabol’s two main adverse effects are hypertension and liver toxicity. Thus, by stacking Dianabol with Deca Durabolin, users will not be aggravating these two symptoms; with Deca being an injectable and only having mild effects on blood lipids. 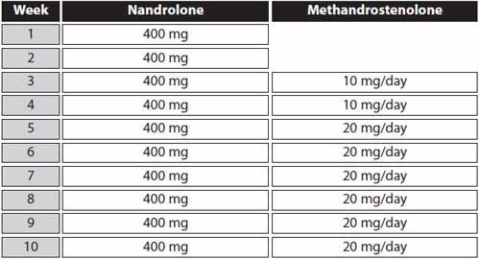 This steroid cycle is taken by experienced steroid users, who already have a Testosterone cycle under their belt and have built up some tolerance to anabolic steroids.

This stack has the power to add 30-40lbs of weight gain to a user, accompanied by 50-70lbs of increased strength on compound lifts.

Some of the weight gained will be in the form of water, thus bloating and water retention are likely; with Dianabol having the aromatase enzyme active.

This cycle has the potential to cause gynecomastia from high levels of progesterone (Deca Durabolin) and estrogen (Dianabol). Thus, an AI (anti-aromatase inhibitor) can be utilized to combat the conversion of testosterone to estrogen, albeit at the expense of exacerbating blood pressure.

This cycle was perhaps the most common duo used in the golden era by the great, classic bodybuilders. Such a cycle produced exceptional levels of mass, without androgenic effects; enabling users to keep their hair intact and prevent male pattern baldness (androgenetic alopecia).

Anadrol (oxymetholone) is a similar compound to Dianabol, being an oral steroid that possesses immense muscle-building and strength-enhancing effects.

The main benefit of stacking Anadrol with Deca Durabolin is due to its androgenic.

Anadrol can help to alleviate impotence associated with Deca Durabolin, due to higher nitric oxide production; improving blood flow to the penis. 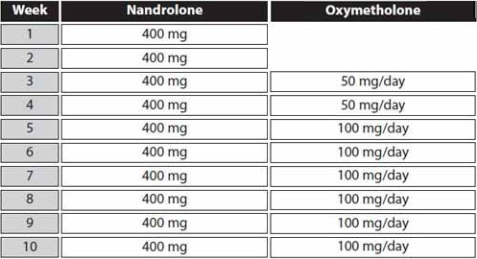 The above cycle is suitable for advanced steroid users only, due to Anadrol’s harsh effects on the body; particularly cardiovascular and hepatic strain.

Anadrol ran by itself has the power to cause hypertension, due to its high mg dosage of 50-100mg per day. It also negatively affects hepatic lipase, an enzyme that can significantly reduce HDL cholesterol levels.

Increased risks of gynecomastia are of concern when taking the above cycle, due to Deca Durabolin increasing progesterone and Anadrol increasing estrogen levels.

An AI (aromatase inhibitor) will be ineffective for treating Anadrol’s estrogenic effects, as it does not aromatize, but instead directly stimulates the estrogen receptors.

SERMs such as Clomid or Nolvadex can inhibit estrogen activity from a receptor level, thus preventing gynecomastia from Anadrol. However, these SERMs can also increase progesterone, thus increasing nandrolone-induced gynecomastia.

Some steroid-users may try and prevent gynecomastia when running this cycle, by administering an aromatase inhibitor (AI) to lower progesterone (not estrogen); however, this can exacerbate cardiovascular strain due to lower levels of estrogen. Furthermore, Anadrol-induced gynecomastia remains a concern even when running an AI.

Testosterone suppression will be extreme post-cycle with this stack, requiring an aggressive PCT.

When these three medications were given to 19 men with shut down endogenous testosterone levels; after 45 days, 100% of them had normal serum testosterone readings.

Testosterone is another potent anabolic steroid, typically taken to add large amounts of muscular hypertrophy (size) and strength in the off-season

However, testosterone can also be utilized as a cutting steroid, due to its strong androgenic properties having a stimulatory effect on lipolysis; resulting in decreased adipose tissue (enhanced fat loss).

Testosterone is regarded as one of the safest anabolic steroids, being FDA approved and prescribed to many men worldwide for the treatment of TRT (testosterone replacement therapy).

Testosterone and Deca Durabolin can be regarded as one of the mildest stacks a bodybuilder can utilize, in regards to side effects.

However, it remains a potent duo for enhancing body composition, with users experiencing 30-plus pounds of muscle gain and amazing improvements in strength. 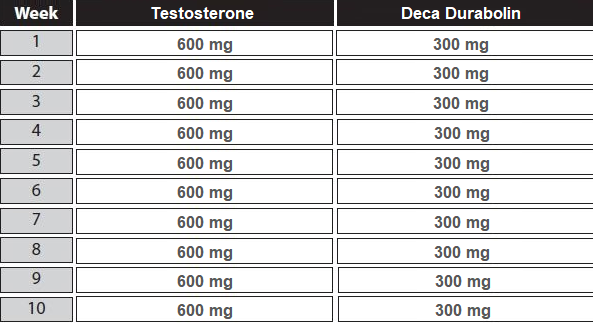 This bulking cycle does not present a massive risk for hypertension; however, cholesterol changes are to be expected; causing mild increases in blood pressure. Deca Durabolin and Testosterone are two of the most cardiovascular-friendly steroids available.

Testosterone compliments Deca Durabolin exceptionally well, due to Testosterone’s androgenic nature reducing the sexual side effects of Deca Durabolin. However, unlike Anadrol, Testosterone does this without compromising health in other aspects (such as the liver).

This cycle is also better suited to someone trying to prevent gynecomastia, as an aromatase inhibitor (AI) can be taken, synergistically lowering estrogen and progesterone levels.

Endogenous testosterone levels will decrease dramatically, requiring a PCT, and some users experience: hair thinning, recession, or loss on the scalp due to testosterone raising DHT (dihydrotestosterone). This cycle is less hair-friendly compared to the Deca Durabolin/Dianabol stack.