Anavar (oxandrolone) is arguably the best cutting steroid if you can afford it.

It is anabolic, therefore users will build muscle during their cut, but Anavar’s also a potent fat burner.

Thus, lipolysis will increase and a user will begin to lose subcutaneous and visceral fat.

A common complaint of bodybuilders cutting is depleted glycogen levels, resulting in muscle shrinkage and a decrease in strength. Anavar increases glycogen storage, causing exceptionally full muscles and huge pumps during their workouts.

Anavar also has very mild side effects, therefore many users do not notice any negative reactions when cycling Anavar. Testosterone suppression is also very slight, with levels recovering back to normal in a matter of weeks (for most users).

Despite being oral, Anavar also does not pose great risks to the liver, as the kidneys help to process Anavar, taking the strain and workload off.

The only real downside with Anavar as a cutting steroid is the price and the reality that it’s often counterfeited on the black market. If you are diligent you may be able to obtain a cycle of Anavar for a couple of hundred dollars. However, for pharmaceutical-grade Anavar, the price is likely to be several hundreds of dollars.

Anavar-only cycles aren’t common among hardcore bodybuilders because of the steroid’s mild nature. Thus, stacking Anavar with another compound such as testosterone will produce better results. However, with this combination, users will also experience more side effects.

Anavar-only cycles are still effective and a more common protocol for beginners during their first steroid cycle. This can be a wise choice, as it introduces the body to a much less toxic compound, at a time when the body’s tolerance is less.

However, beginners who are coveting massive muscle gains may be disappointed with an Anavar-only cycle. Instead, they may opt for a Dianabol or testosterone-only cycle. 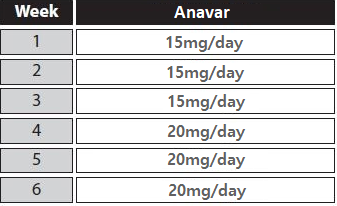 This cycle is suitable for beginners. Once a man has built up some tolerance to Anavar, he may wish to start on 20mg/day in future cycles and extend the cycle up to 8 weeks. 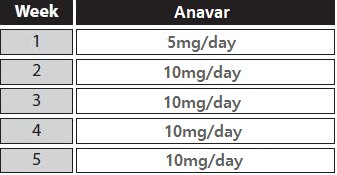 This cycle is suitable for beginners. It begins with a small dose to gradually introduce the compound, reducing the risk of side effects. A first-time female cycle can also last for 4 weeks.

Once a woman has built up some tolerance to Anavar, she may choose to begin future cycles at 10mg per day and extend the cycle duration to 6 weeks (for further results).

Testosterone is an injectable steroid that produces exceptional muscle and strength gains. Combining this steroid with Anavar enhances its anabolic effect, whilst increasing lipolysis (fat loss). Enanthate or cypionate are common testosterone esters used for this stack.

Note: For beginners, a testosterone-only cycle is a better choice, as stacking test and Anavar will exacerbate cholesterol issues and endogenous testosterone suppression.

Below is intermediate testosterone and Anavar cycle. This is more suitable for men who have already completed one or two cycles of testosterone or Anavar. 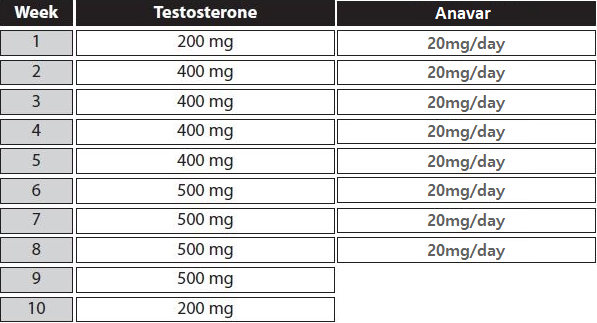 Anavar and testosterone are not a stack recommended for women, as the addition of testosterone greatly increases the chance of virilization. Elite female bodybuilders may implement these two steroids together, but with the expectation of masculinization occurring in moderate doses.

Testosterone is predominantly an injectable steroid; however, Andriol (testosterone undecanoate) is the lesser-known oral version.

Test undecanoate is less popular than injectable testosterone (among bodybuilders) because it is more expensive and less powerful.

However, this stack may be of great interest to people who don’t want to take injectables and want better results than an Anavar-only cycle. There are more powerful and cheaper orals than test undecanoate, such as Dianabol or Anadrol 50. However, testosterone undecanoate is considered to be a ‘safe oral androgen‘ following a 10-year study. Anadrol and Dianabol orals are very hepatotoxic in comparison.

Research shows that liver enzymes do not rise on testosterone undecanoate (over 10 years); plus the risk of gynecomastia and prostate enlargement is low.

In one of the studies cited above, 80-200mg of testosterone undecanoate was taken for 72 months by 35 men. 9 of them had never received such androgen treatment before. None of these men developed gynecomastia at any stage during the study.

In the second study, 33 men took testosterone undecanoate for 10 years, and only two men observed a mild reduction in urine flow.

Thus in terms of side effects, Andriol is very similar to Anavar, being classed as a ‘safe’ drug (in medicine). However, LDL levels are still likely to rise and testosterone levels will be suppressed temporarily post-cycle.

Note: If you implement this cycle, ensure Andriol (testosterone undecanoate) is taken with food, as its bio-availability is very low when taken on an empty stomach. To further increase absorption ensure the meal contains at least 19 grams of fat or a minimum of 30% of the meal’s calories consisting of fat. Both of these methodologies have been effective in the research. Higher quantities of fat present in the meal, correlated with higher serum testosterone levels in users taking Andriol.

Anavar can technically be combined with any other steroid. However, beginners should avoid taking it with harsh compounds (such as Anadrol, trenbolone, Winstrol, etc).

Also, Anavar’s dry and hard effects will be counteracted if you stack it with a ‘wet’ steroid. I.e. one that aromatizes and causes significant water retention. Some examples of wet steroids are Anadrol, Dianabol, Testosterone, and Deca Durabolin.

Thus Trenbolone or Turinabol may be considered if users want to build more muscle/burn more fat, as it’s also a dry compound. Winstrol is another dry steroid. However, Trenbolone and Winstrol are particularly harsh on the body (Tren more so), hence why they are mainly cycled by experienced steroid users.